Bring your Bathroom to Life with Bathroom Closet Shelves 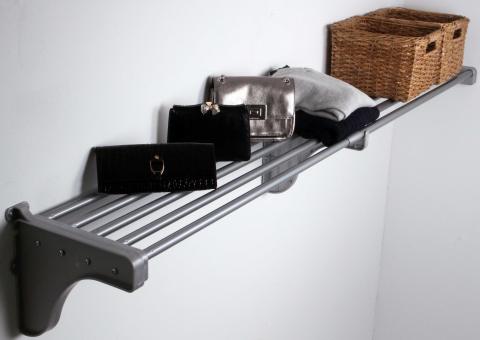 Your bathroom is a pretty simple place, to put it lightly. You go in there to do one thing, normally, and for this reason, many people fail to consider outfitting it with more than a few implements and modifications. For example, have you ever considered adding additional shelving? You do it for every other room in your home, so why not think about doing it for your bathroom? You might have a wide open space (or at least as wide open as a bathroom is going to get), or you might have a closet to occupy. As with any other closet, a bathroom closet is obviously going to deal with a great amount of unused space, or at least inefficiently used space. For example, you might have extremely deep shelves that seem to have absolutely no direction, and that is actually quite common. Then again, you might have a closet that seemingly has no storage options, and is simply an open space with a floor, and that isn’t going to help anyone. There are many different reasons to consider adding this amazing shelving system to your bathroom, which we’re going to list below. Before you know it, you’ll be on board with the idea of bathroom closet shelves, ready to bring your water closet to life.

Towels – One of the most common places to store towels is in the hall closet, of course, but what good does that do you when you suddenly need one? Not much, that’s for sure! If you don’t want to walk from the confines of your warm bathroom into the hallway to retrieve a towel after your shower, then having a shelving system built into your bathroom can definitely help you.

Toilet Paper – There is always going to be room for more toilet paper, and your shelving system can allow you to store even more.

Toiletries – Whether it’s soap, shampoo, shaving cream, razors, or makeup, you need a place to store them, and anywhere other than the bathroom is simply going to be inconvenient. That being said, there is nothing quite like having a good set of shelves to keep your toiletries properly stored in the bathroom.

These are three of the most common uses for bathroom closet shelves that you are going to run across though you can be rest assured that there are plenty more if you just think about it. The best part of these shelving units, especially those from EZ Shelf, is their ability to hold a significant amount of weight without anchoring to a stud. Traditionally, a stud is a piece of solid wood, typically the frame, which holds the brunt of the load in a wall. When a house, or any building is constructed, it is built around a series of frames, with the studs running long ways from floor to ceiling. These serve to support the house, but they also  help with decorative items such as picture frames, and the more functional shelves. The stud helps to hold them in place, as typically, anchoring to the drywall is a bad idea. The EZ Shelf variant, on the other hand, is able to anchor directly into the drywall and remain sturdy. In fact, it can support up to two hundred pounds, which is light years ahead of any other shelving system on the market.

As you can see, there are plenty of reasons to consider the EZ shelf system. There is a good chance that you were already planning to install shelves in your bathroom – who wouldn’t, but you need to make sure that you have the best.

It’s time to take a look at your bathroom space and make sure that you have the space for durable closet shelves that will last for many years. The best part? You don’t even need help to install these. That goes for both professional help, and help from any friends that you might have otherwise enlisted to get the job done. These shelves are the ultimate DIY project, and they don’t even take long to install. As you can see, there is plenty of reason o give them a try.

Start considering the unused space in your bathroom and think about how you can make it work in your favor. Once you’ve figured that out, you’ll be well on your way to setting up the ultimate storage space.